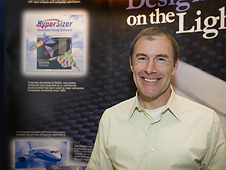 Two decades ago, he was part of a team at Langley Research Center, developing software called ST-SIZE to help reduce mass on new high-speed aircraft designs, including the National Aerospace Plane.

Today, he’s back at Langley as head of Collier Research Corp., a Hampton contractor with HyperSizer, a son-of-ST-SIZE that is being used to reduce mass on the Orion crew exploration vehicle that will transport astronauts as part of the Constellation program of space exploration.

It’s been quite an odyssey.

“Actually ST-SIZE was the software developed by myself and some of the other NASA guys working the National Aerospace Plane,” Collier says of its beginning. “Its purpose was to do a very fast weight-reduction using different design concepts and configurations of vehicles, so they could determine which one was going to be more optimum.”

With the decline of the high speed research came an entrepreneurship idea.

“At that time, NASA was doing technology transfer,” Collier says. “It sounded kind of neat. I wanted to keep working that ST-SIZE project, and the NASP was dying down, so I thought it was a good opportunity to strike out on my own.”

And take ST-SIZE with him. Licensing that software turned out to be significant for both NASA and Collier.

The timing was right.

“NASA had done this before with patents—with hardware—but never with software,” Collier says. “For us, we just wanted to get the technology and hit the ground running. I think some of the folks at NASA wanted to use us as a trailblazer for how to do this in the future with other companies.”

In 1996, Langley licensed ST-SIZE to Collier, who started his own company.

The firm then added features and matured the software for new applications. Eventually, ST-Size evolved into Collier’s own software, called HyperSizer.

The company’s initial work with NASA began by collaborating with Glenn Research Center and Pratt and Whitney to perform software integration for an aeronautics project.

“It was the first opportunity we had to be a team partner,” Collier says. “It was not just us and NASA, but it was also a major corporation: Pratt and Whitney. So it gave us a chance to use the tool, to share the database and to be able to see how they used the tool firsthand.”

A similar partnership followed with the Air Force Research Laboratory and Lockheed Martin for designing a long-range strike aircraft.

In 2005, the firm received a Small Business Innovation Research (SBIR) contract from Langley to partner on structural designs for NASA’s Orion.

According to Jeff Cerro, a structural engineer in Langley’s Vehicle Analysis Branch, “they’re the ones who have taken the essence of design manuals from a typical aerospace corporation and formalized that into code. You can (say), ‘I want a piece of stiffened structure or a piece of honeycomb, or something with cross framing and stiffeners all together,’ and tell it to size that for you.”

Since then, Collier has received more SBIR Phase 3 awards from Langley and other NASA centers that are using HyperSizer on almost all aspects of creating Orion.

For Collier, NASA’s using HyperSizer on the crew exploration vehicle is momentous.

“From the launch vehicle, hydrogen tank, to the crew module, to launch abort system to the lunar lander systems, nearly every piece of the new structure that is being designed is being impacted with the HyperSizer software,” he said. “That to me is the most exciting thing I can talk about.”

The Orion work is also having a positive impact on HyperSizer, helping to build out the software’s capability for future projects.

From ST-SIZE and NASA to HyperSizer and Collier Research, it’s been a terrific trip. Better yet for Craig Collier, it’s one that has a long way to go.